With Forecast:
AirNow.gov is a partnership of the EPA, NOAA and several other agencies to provide AQI information
Accuweather

Discrepencies in reports:
From PurpleAir to AirNow, Your Air Quality Maps for Wildfire Smoke | KQED
Users have noticed a discrepancy between what official sites are reporting and the readings displayed on PurpleAir.
Web Cams:
Westshore Cafe
Fire Camera Displays | Nevada Seismological Lab
Examples:
On September 14th 2020 Air quality hit 503 as measured by Purple Air near the California Oregon border.
AQI reporting vales vary by the sensor and parameters used.
See AQI Measurement
Anything over 300 is considered hazardous by the EPA and their scale doesn't go above 500
This was the average over several hours so was not a 10 minute spike. click on image to enlarge 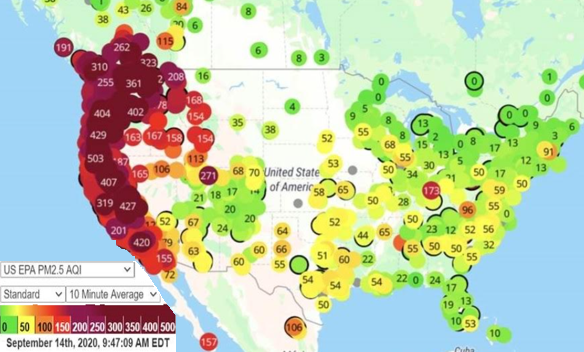 I left my car windows open a crack because of the 108° temperature and it was covered with ash from the fires in the morning.


The next day the smoke was blown east to the Sierra Nevada and air quality hit 573 at Mammoth Lakes North-East of the Creek fire.
A day later the air quality averaged 740 over a 2 hour period near Shaver Lake at the edge of the Creek Fire.

PM - Airborne particulate matter (PM) is not a single pollutant, but rather is a mixture of many chemical species. It is a complex mixture of solids and aerosols composed of small droplets of liquid, dry solid fragments, and solid cores with liquid coatings. Particles vary widely in size, shape and chemical composition, and may contain inorganic ions, metallic compounds, elemental carbon, organic compounds, and compounds from the earthâs crust.
Particles are defined by their diameter for air quality regulatory purposes. Those with a diameter of 10 microns or less (PM10) are inhalable into the lungs and can induce adverse health effects. Fine particulate matter is defined as particles that are 2.5 microns or less in diameter (PM2.5).
World Health Organization considers PM2.5 the worldâs single biggest environmental health risk.

Particulate matter(PM) is the primary pollutant in the US. PM comes in many different sizes and it can as small as a hair. 90% of the time particulate matter is inviable to human eyes. PM has many sources, such as combustion such burning fuels from cars, ships, airplanes, trucks, buses. Also, it comes from certain types of facilities as cooking facilities, meat industries, wood-burning, wildfires. PM also comes from natural resources like dust and storms. But most of the PM in the is formed by a mix of several pollutants retained in the air.